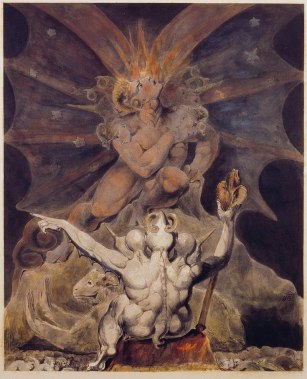 The number 666 is notorious.  It represents evil.  This number comes from the Apocalypse of John (Revelation).  The Apocalypse is the mystical prophecies of a first century AD Christian by the name of John.  The Apocalypse is the last book in the Bible (Revelation).  666 is the number of the incarnation of evil in the last days just prior to the final battle between good and evil.  It is the number of a person, pejoratively called the beast, who will have all the authority of the Devil just as Jesus has all the authority of God.

“This calls for wisdom: let anyone with understanding calculate the number of the beast, for it is the number of a person. Its number is 666.” (Revelation 13:18)

The Apocalypse invites us to calculate the number and thereby to identify the person.  The most likely theory is that the number stands for Nero who was emperor of Rome from AD54 to 68.  Nero initiated in those days a terrible persecution of Christians.

In classical Hebrew and Greek, the letters of the alphabet represent numbers.  In the first century, this provided an opportunity to make secret codes for the initiated.  The formal title of Nero in Greek was NERON KAISER.  If we transpose that into Hebrew letters we get NRON KSR.  There are no vowels in ancient Hebrew except the letter O.  If we add up the value of each letter we get 666!  N is 50. R is 200. O is 6.  N is 50.  K is 100. S is 60 and R is 200 = 666.  Nero’s formal title was sometimes written as NERO KAISER that is without the final N in NERON.  This fact is very important and adds weight to the theory that 666 is Nero.  Some ancient manuscripts of the Apocalypse have 616 instead of 666.  If we drop the final N = 50, lo and behold, we get 616.

The Apocalypse seems to be saying that in the last days the decisive battle between good and evil will take place.  In those days evil will be embodied in a person who will be like Nero but much worse and much more powerful.